50 years ago more or less, a young man named Pantelis (Peter) Kalamaris had the strength and courage to leave his parents

and older siblings behind in Chios, Greece and come to Canada for a better life.

This new life in Canada was not an easy one. With only a basic education, Peter found work doing anything- from picking tomatoes, picking worms, installing eavestroughs, to washing dishes as his newly adopted country did not recognize his barbering qualifications from Greece. Peter worked every single day and not once did he ever apply for or wanted to receive any social assistance. Peter worked hard and saved his money.

Peter saved enough money to support his family back in Greece, and as well had saved enough to get married, buy a house, and several income properties as well in his new home of Weston, Ontario. After receiving his Canadian citizenship-a proud moment for Peter, and his barbering license, slowly Peter sponsored his siblings to settle in Canada. A selfless man, Peter set his brothers up in businesses that he had established-

Sun Crisp fish and chips, and P&M Restaurant. Peter's sisters were married, and chose to settle in Chicago. Peter always was thinking of his family.

On October 30th, 1961, Peter opened Peter's Barber Shop and the rest is history. Tens if not hundreds of thouands of people have sat in his barber's chair- actors, hockey players, politicians, and everyday people...everyone was greeted with Peter's warm smile and listened to stories of Greece, the military, his adventures in Canada, and then in November 1971 stories of his only son growing up who would later put his teaching career aside and help his aging father in the barber shop. In April of 1999, Peter was also blessed with his only granddaughter Kathy.

Appearances on CTV National News, CANADA-AM, the front page of the Toronto Star, the Globe and Mail, as well as other local news programs propelled Peter's barber shop to great popularity...being referred to as the coolest barber shop in Toronto, and hockey's other hockey hall of fame.

In fact, hockey's holy grail, the Stanley Cup will be at Peter's Barber Shop on October 29th to help celebrate their 50th anniversary. John Street in Weston will be shut down as many events are planned to celebrate this milestone. Unfortunately the 50th anniversary is bittersweet as Peter (76) had been suffering from alzheimer's for many years and on July 25th, was admitted to the hospital after suffering a stroke... and on Monday October 3rd-the day of his discharge, Peter closed his eyes for the last time and went to sleep.

There are no words to describe the impact that Peter has had on his family, his community, and his country. The 50th anniversary will celebrate his good works and keep his memory everlasting.

Today at Etobicoke York Community Council the councillors unanimously voted on naming the laneway running north/south as pantelis kalamaris lane and in addition to add pantelis kalamaris gardens ceremoniously to John Street to honour the 50+ years of service that my father gave to the community.

Prior to the meeting I decided that in the best interest of Weston with the proposed redeveloping, this would best serve the our adopted home of Weston and still honour my father as well.

Thank you to the close to 2,000 people who supported this tribute to my father, councillor Frances Nunziata, her assistant Jennifer, MP Mike Sullivan, MPP Laura Albanese, Masum Hossain from Weston Village BIA, Muse Kulow from Immigrant Post Magazine and most importantly my family XOXOXOXOXOXO.

Thanks to Gillian Zidner, George and Sotiris for coming out as well to today's meeting.

Thank you to councillors Frances Nunziata, Doug Ford, and Giorgio Mammoliti for the heartfelt words spoken about my father at today's meeting.

Weston’s late, great Peter the Barber is set to be honoured with his own laneway after west-end councillors voted unanimously against city staff recommendations rejecting the name change Tuesday at Etobicoke York Community Council (EYCC).

The unnamed public lane extending west from John Street to Elsmere Avenue will be known as Pantelis Kalamaris Lane, after the iconic owner of Peter’s Barber Shop, following Tuesday’s vote.

Kalamaris’ son, Peter Kalamaris Jr., pleaded with councillors at Tuesday’s meeting to put aside city staff recommendations to deny his father the honour of namesaking a laneway in his beloved Weston because of mere procedure.

“Councillors, we are just a few weeks away from the one-year anniversary of my father’s passing,” he said, noting that Kalamaris died last October. “I truly hope that today, on Sept. 11, you will all stand united with our family and honour my wish, my family’s wish, and my community’s wish of honouring my father by naming the laneway...as Pantelis Kalamaris Lane.”

In their report to EYCC, city staff urged councillors not to approve the proposed name, as it didn’t comply with the city’s Honourific and Street Naming Policy that states “honourific names shall only be awarded posthumously to individuals who have been deceased for at least two years,” and because the proposed name uses both Kalamaris’ first and last names, whereas the policy dictates only the last name be used.

Laura Albanese, MPP for York South-Weston, was one of close to 2,000 citizens who signed a petition to allow the name change.

“Entrepreneurs like Mr. Kalamaris are the heart of communities like Weston,” she wrote in a letter to EYCC, read aloud by Peter Kalamaris at Tuesday’s meeting. “I believe that giving the lane both his first and last name is a great nod toward the contribution he made and the lasting legacy he leaves behind.”

After immigrating to Canada from Greece in his early 20s, Kalamaris settled in Weston and in 1961 set up his now-iconic barber shop on John Street. He also sponsored his brothers to come to Canada, and helped them set up their own businesses in Weston: Sun Crisp Fish and Chips, and P and M Restaurant, which remain family-owned.

The most famous of them, though, is Peter’s Barber Shop. Known far and wide for its unofficial hockey museum – complete with signed NHL jerseys on the wall – the shop has boasted a roster of NHL customers from Scotty Bowman, to Gordie Howe, to Dave Keon over the years.

In recognition of all of Kalamaris’ hard work as a community builder in Weston, longtime York South-Weston Councillor Frances Nunziata put forth a motion granting the Kalamaris family’s application an exemption from the Honourific and Street Naming Policy.

“When you see people going down John Street, you just know they’re going to Peter the Barber,” she said, recognizing Kalamaris’ popularity in the Weston community. “We have overwhelming support from the community (to name the laneway Panelis Kalamaris Lane). Initially when the process was first started, we had hundreds of names on the petition, and even today have received a lot of correspondence in support of it.”

– with files from Tamara Shephard

SO WAS FLAG WAVING......CANADA AND GREECE

THE VILLAGE OF WESTON 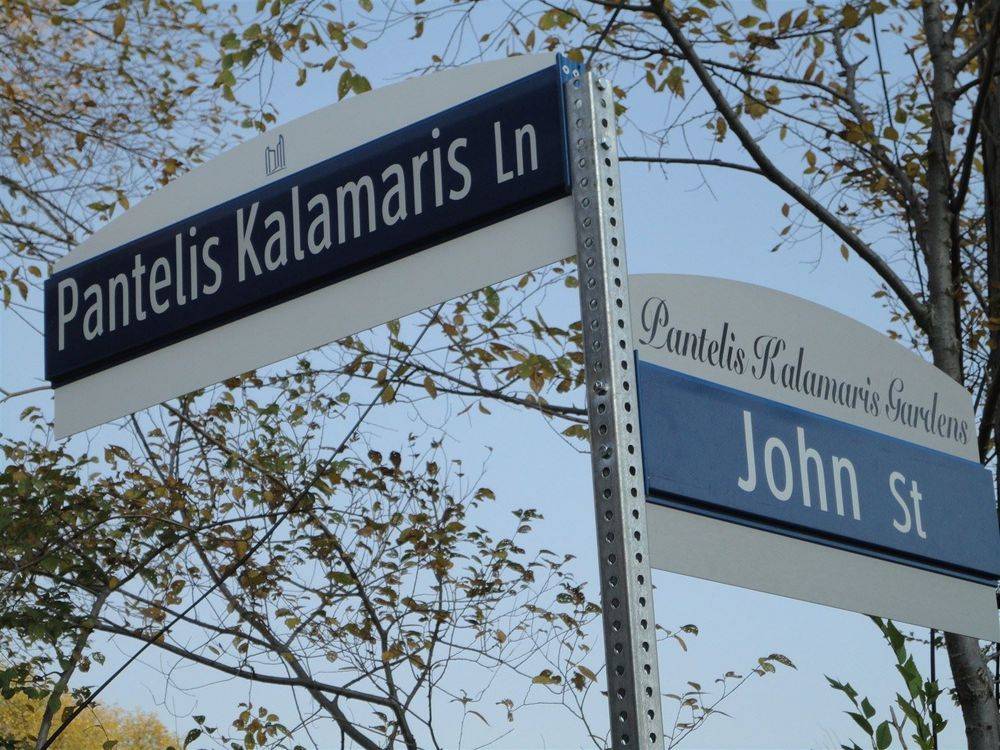 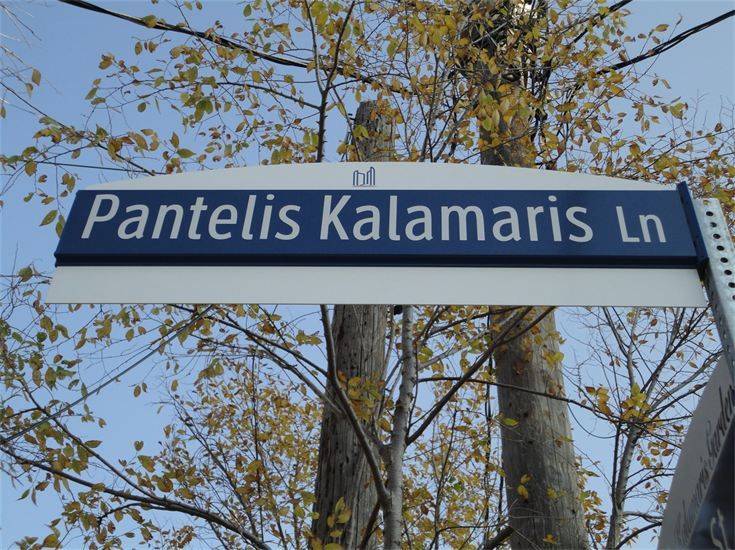 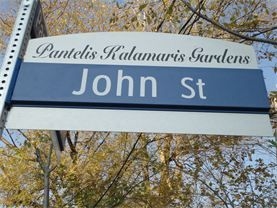 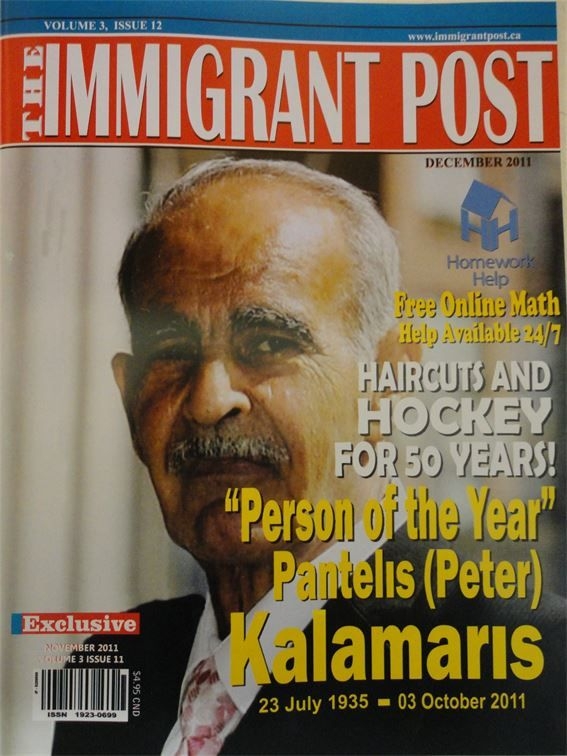